Willis, Va. (June 18, 2021) – Kentucky native Jr. Williams has been entertaining audiences as part of numerous award-winning bluegrass bands for 36 years contributing his innovative banjo style, vocals, and his trademark humor. He is now set to record a new single on Mountain Fever Records scheduled for release later this summer and a full album next year. 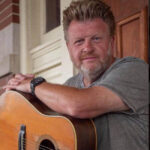 “I’ve known Jr. a long time. He is an entertainer and a great one at that. He can sing the daylights out of any song and his talents with stringed instruments stands out with his personal style and flair,” said Mark Hodges, CEO and Producer, Mountain Fever Music Group. “I can’t wait to get him in the studio with Aaron Ramsey who will be co-producing and engineering the project. I am confident this will be a fantastic project!”Jr. began playing guitar and singing at age six, later mastering the banjo with his unique style. In a featured interview with Banjo News, they wrote, “Good music can hit you hard and really get your attention with its raw emotion and power. That’s how Jr. Williams’ banjo playing and singing struck me. Junior’s picking has substance and guts. He has great timing, so the notes are always in the right spots.”

Jr. previously performed with the award-winning group NewFound Road and later as a founding member of NewTown where the band hit the Billboard Top 10 Bluegrass Chart with the album “Harlan Road.” Music fans can catch Jr. in the coming months firing up the banjo and singing with Tim Shelton Syndicate.

“I first met Mark Hodges about 13 years ago. We had talked about doing a record, but unfortunately, it didn’t pan out at the time,” said Jr. “Fast forward to today and it’s my honor to begin production on a project that has been many years in the making. Mark and all the folks at Mountain Fever are top-notch people, some of the best in the industry. I appreciate them and their confidence in me. Hope to have some music out to folks soon!”

Sign-up for Mountain Fever Records here on our website news and be on the lookout for Jr. Williams music.