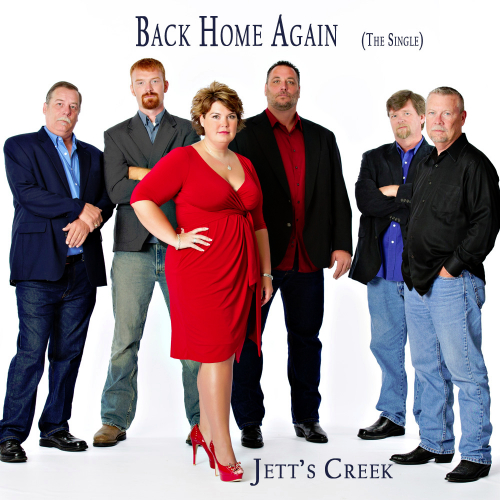 The Wait is Over…that’s the title of the new project from Jett’s Creek to be released in February 2013. And for fans of this great band of singers and musicians, that’s very welcome news. Continuing the traditional appeal and tight harmony found in their previous self-released albums, Supposed to Be in 2008 and Guilty in 2010, Jett’s Creek turned to friend and colleague Clay Hess to produce this next CD that features incredible original material with classic favorites to blend the best of bluegrass.

Featuring Angie Young on vocals with Nathan Bray on lead guitar; Tim Hale on banjo; Jeff Byrd on bass; Chuck Little on mandolin; and Jon McIntosh on rhythm guitar and vocals, Jett’s Creek may very well stake their rightful claim with this CD on the national bluegrass charts. The first single, “Back Home Again” is a fine example of the original music offered on the new CD.

“This is the first song I’ve written in a couple of years,” stated Young. “I had most of the lyrics but was struggling to say what I wanted and make it flow. I finally asked my brother, Adam (McIntosh, who performs with Joe Mullins & the Radio Ramblers) to take a look at it and ‘Back Home Again’ was born. It’s a snapshot of where I am in my life and it feels right that it came out in a song.”

After years of working regional venues and trying to keep things in-house, Young expresses her excitement about working with a new producer and record label.

“Working with Clay has been great. He knew exactly what I wanted ‘Back Home Again’ to feel like and knew how to get it there and our label, Mountain Fever Records, has been fantastic. I don’t think I could be happier with the team Jett’s Creek has or the work we are doing.”

Mark Hodges of Mountain Fever Records agrees, “I have loved this band for a long time. We signed them about a year ago and they’ve been working hard on this new CD ever since. I think this first single will give the DJs and fans a lot to rave about. I know I’m certainly proud of what this band is doing and that we are able to present it to fans of great music everywhere.”