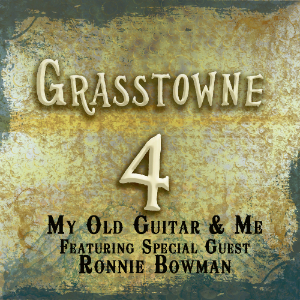 We are proud to announce the addition of bluegrass favorites, Grasstowne, to the label’s roster of artists. “This Old Guitar And Me”, the first single from the upcoming CD titled Grasstowne 4, is available to radio programmers today.

Grasstowne was formed in 2007 and has become a staple among notable bluegrass bands at festivals around the country.

Founding member Alan Bibey has made a name for himself as one of the most creative and technically gifted mandolin players in bluegrass and acoustic music.

The Full Album is expected in the fall of 2013.

A stylist who turned heads while spending his formative years in other bands, his tasteful innovations and pristine execution earned him inclusion in The Young Mando Monsters project, Mel Bay’s Mandolin book The Greatest Mandolin Players Of The Twentieth Century as well as The Bluegrass All-Stars Sugar Hill Records project. SPBGMA’s 3-Time Mandolin Performer of the Year has also been nominated for a Grammy® and in 2004, the Gibson Company put into production the Alan Bibey Signature Series line of mandolins, reaffirming his status as one of the most influential mandolin players in bluegrass and acoustic music history. Bibey is joined by four of the finest crop of young musicians in the business today—Dustin Pyrtle on guitar; Adam Haynes on fiddle; Justin Jenkins on banjo; and Kameron Keller on bass. Together, the band is looking forward to the next step in Grasstowne’s career; an exciting new project on Mountain Fever Records featuring a new single, “This Old Guitar And Me” with special guest Ronnie Bowman and an extensive tour in 2013.

“This Old Guitar And Me”, written by David Carroll, laments of subject matter that is undeniably identifiable to every musician who’s ever spent any time on the road—their love affair with a guitar. Sung by Ronnie Bowman with such an emotion that one would think he was singing about a relationship with his wife, the song is without a doubt going to strike a proverbial chord with fellow music makers and music lovers alike.

“Alan, along with all the guys in Grasstowne and myself fell in love with this song,” stated Bowman. “It’s a great song and we all had a big time recording it. These guys are outstanding and I think the feeling in the studio comes through on this recording,”

Alan Bibey explains how the band came to bring Bowman into the mix: “Ronnie and I met when I was 16 and we’ve been the best of friends ever since. I knew he was a great talent the first time I ever heard him sing and we played in a couple of groups together before he took a job with the Lonesome River Band and I helped start IIIrd Tyme Out. Since then, I’ve had the pleasure of writing some with Ronnie and we’ve written 3 songs for this new Grasstowne album.”

Grasstowne will be touring in 2013 in support of the new Mountain Fever Records project and are already planning several shows with Bowman.

“We are very pleased to have signed with Mountain Fever Records and can’t say enough about how great Mark Hodges is to work with. He’s as excited about the music as we are and that means a lot.” “Alan played mandolin on the very first national release that our record label ever sent out,” stated Moutain Fever Records executive, Mark Hodges. “When I Iearned they were going to record another project, I saw it as an opportunity to work with one of my favorite people in the business again. Anyone that knows Alan and and has heard this band, knows they are wonderful, talented guys and we are looking forward to a long working relationship with them.”