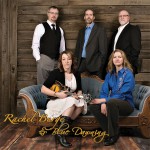 “My Cold Heart,” written by Burge, is a perfect example of the depth of her musical talent and showcases it well.  There are not many women in the business that can sing driving bluegrass but Rachel pulls it off effortlessly,” says Mountain Fever owner Mark Hodges.
Burge blends the lines of traditional and contemporary bluegrass as band leader and mandolin player, styling her playing after some of the greatest mandolin players on the circuit today.  A graduate of Glenville State College, she holds a degree in Music Education as well as a certificate in Bluegrass Music.   She was able to participate in one of the only Bluegrass music certificate programs in the nation.  As a result, she has performed with the likes of Jesse McReynolds, Mac Wiseman, Ronnie Reno, The Dillards and many others
Blue Dawning musicians Lance Gainer on guitar and vocals, Radford Vance (formerly with Northwest Territory) on five-string banjo, Michele Birkby-Vance (formerly with Northwest Territory) on fiddle, and Rick Westerman (Buck and Company, Rarely Herd, The Hart Brothers) on bass and tenor vocals,  all form an experienced group able to interpret Burge’s musical vision.
“I love the harmonies and musicianship of this group,” says Mountain Fever’s Mark Hodges.  “Their sound is immediately identifiable with the West Virginia mountains but is contemporary in its styling and their driving tempos take bluegrass to new places .”
Rachel Burge & New Dawning are energizing audiences all over.  Their new self titled CD will be released  in late June. Mountain Fever is proud to give you this little taste now.
Darrell Webb – DREAM BIG New Single From The Bluegrass Brothers