Darrell Webb is getting ready to celebrate 20 years in the bluegrass industry with the release of his brand new album Dream Big TODAY.  The first single from the album, “More Life,” penned by songwriting great Mike Reid and Rory Bourke, was released as a single several months back.  Nominated for Emerging Artist of the Year at the 2013 International Bluegrass Music Awards, Webb has no plans to slow this trip down.  If anything, he’ll be ramping it up.
Dream Big features an all-star lineup of some of the industry’s biggest names including Rhonda Vincent, members of Blue Highway, 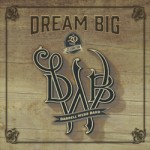 members of The Grascals,  Sammy Shelor, Ronnie Bowman, Tim Stafford, Jason Burleson, Shawn Lane, Rob Ickes, Jason Moore, Aaron Ramsey, Jamie Johnson, Darrin Vincent, Jamie Dailey, Jim VanCleve, Terry Eldredge, Phil Leadbetter, Chris Wade, Jeremy Arrowood, Brandon Green, Jake Joines, and Jared Hensleyand is produced by ground-breaking musician and bluegrass producer Jim VanCleve, from Mountain Heart fame.
“This is my favorite project ever!” Webb says of Dream Big.  The album was recorded at Omni Artist Studio in Weaverville, North Carolina.
Webb, well known for bringing a healthy dose of zeal and drive to the stage, while reaching beyond traditional boundaries, fully embracing all aspects of the bluegrass genre, is a Grammy-award nominated session player for his work with Dolly Parton, and a decorated IBMA and SPBGMA award winner.  He’s played with some of bluegrass music’s biggest names.
Before forming the Darrell Webb Band in 2009, he received two Grammy nominations for his performances on Dolly Parton’s Halos and Horns and For God and Country. He has received awards from both the International Bluegrass Music Association and the Society for the Preservation of Bluegrass Music of America.
Along with Parton, Webb has recorded on projects with Marty Raybon, Bobby Hicks, and the queen of bluegrass, Rhonda Vincent. His 20-year career also includes performing with banjo legend J.D. Crowe and the Lonesome River Band. He has appeared on stage with Bill Monroe, Ralph Stanley, Dierks Bentley, and more.
The Darrell Webb Band revolutionized the way acoustic music is performed. For an acoustic band performing without the use of stationary microphones, the band’s high-impact concert fully energizes the audience and keeps fans on their feet wanting more.
It’s Raining In Virginia – New Single From Breaking Grass Welcome Rachel Burge & Blue Dawning