Mississippi’s Volume Five heads to radio today with the release of “Crazy Night,” the first single from their upcoming Mountain Fever Records album VOICES, scheduled to hit the streets in January 2015.  Volume Five is proving to be an exciting new band, blazing a red-hot trail on the bluegrass scene. 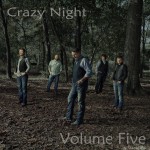 A group that started as a casual jam band in 2008, has now grown into one of bluegrass music’s most unique new acts.  Their first gospel and 4th overall release on Mountain Fever Records was the well crafted Southern gospel flavored bluegrass album, The Day We Learn To Fly, from which their nominations stemmed.
The band is excited to welcome back Colby Laney to the roster, who returns after a stint with Larry Stephenson. While each member comes to the table with a strong pedigree, having served tenure nationally with such well-known artists as Marty Raybon and Full Circle, Randy Kohrs and The Lites, The Roys and Tony Rice, these five musicians together truly blend into a band with staying power.
Volume Five features the talents of ring-leader Glen Harrell on fiddle; Harry Formby Clark on mandolin; Colby Laney on guitar, Patton Wages on banjo, and Chris Williamson on bass; and while Volume Five is considered a traditional band, their earthy, soulful singing, spot on harmonies, and precision picking set them apart from others.

V5’s touring schedule has afforded them the benefit of playing with numerous artists over the years, some of whom have become fans such as Buddy Melton of Balsam Range who says, “What defines a great band? Superior musicianship,impeccable singing, moving song selections…Volume Five has all the above and more…Extremely talented, yet humble and genuinely real people, Volume Five has a magical quality about them that will undoubtedly make a lasting impression in the world of acoustic music.”
One thing fans can count on with Volume Five is that they will never be let down with their live performances and that those live performances will transcend the live show and be just as impactful on their recorded music.  Their level of quality musicianship is constant and is making an impact at radio.