This release follows on the heels of their recent performance on RFDTV’s “Larry’s Country Diner,” a show that has become a favorite for 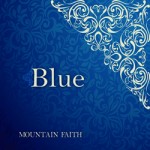 audiences nationwide craving comprehensive traditional country and bluegrass programming. Mountain Faith fit right into the network’s desire to offer viewers wholesome, down-home, family oriented entertainment for their nationally-broadcasted variety show, known for its spontaneity, impromptu dialogue and live-to-tape performances by the best country music artists of yesterday and today.
Longtime favorites at Dollywood, the accomplished band displays talent beyond their years with impressive chops both instrumentally and vocally, having kept them performing at the popular entertainment park on a regular basis for much of their 14 years together. Their first single from the album, “Feelin’ Blue,” hit radio recently, showcasing the groups singing, playing and performing to a national audience.
Their unique style, spotlights their ability to combine both traditional and contemporary bluegrass, classic and modern country, folk, acoustic, and contemporary gospel with a touch of rhythm and blues, and presents a pure, fresh and upbeat style all their own, engaging audiences at every turn.
Band members include Sam McMahan on bass, Luke Dotson on guitar along with lead and harmony vocals, new member Cory Piatt on mandolin, Summer McMahan on fiddle along with lead and harmony vocals, and Brayden McMahan on banjo and harmony vocals. Summer McMahan’s strong vocals are a hallmark of the band, putting her squarely in the middle of some of today’s powerhouse young female bluegrass vocalists on the rise. The band recently raised eyebrows at the SPBGMA awards as the only band to have all members but one nominated for instrumental awards. For more information on Mountain Faith, visit www.mountainfaithband.com
Crowe Brothers – 40 Years Old Volume Five Releases New Single – Crazy Night