Mountain Fever Records is proud to announce the label debut of Deeper Shade of Blue with their new album, Steam, available everywhere today. 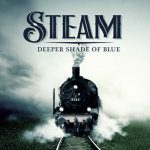 North Carolina can once again be credited for producing great bluegrass. Hailing from just south of Charlotte, Deeper Shade of Blue is comprised of Jim Fraley (banjo/vocals), Jason Fraley (mandolin/vocals), Troy Pope (guitar/vocals), Frank Poindexter (dobro), and Scott Burgess (bass). The band has been together just over 17 years and has self-produced six albums. A quick search on YouTube will no doubt prove why this band has been a favorite in their home state for years. With their tight harmony singing, they’ve been lauded as a top notch vocal group and one that regional festivals have added to their lineup consistently. With the addition of Mountain Fever Records to their team and the release of STEAM, fans and the music industry can expect Deeper Shade of Blue to make waves on an international level very soon.

STEAM rolls out of the station in high gear! The title track and first single is about a man who talks a good game but is slow to action when it’s time to prove to his buddy he’s got what it takes to pick up a woman at the bar. It sets the tone for a very antithetical track list that proves this band can mix it up and keep their listeners guessing as to what they’ll do next. With eight of the twelve songs written by members of the band, the writing styles are varied from a poignant love song (“In Your Eyes” by Troy Pope), true story songs (“Kentucky Slave House” by Jason Fraley, “Out Of The Blue” by Frank Poindexter), and genre-related tribute songs (“Put Some Bluegrass In My Ear,” “Uncle Josh The Dobro King,” both by Frank Poindexter). The band also went deep-catalogue with two cover songs and managed to make them distinctly their own; “Rain And Snow” performed as a haunting ballad and “Most Of All” originally recorded by country pop singer B.J. Thomas. The album also includes three gospel songs; an original written by Scott Burgess, “Pearly Gates,” a sweet rendition of “I Just Steal Away And Pray” featuring guitar-extraordinaire Wyatt Rice, and one of the most

outstanding versions of “How Great Thou Art” you’ve ever heard and a Deeper Shade Of Blue fan favorite. Rounding out this splendid album is a peppy instrumental, “Hook It,” composed by Jason Fraley.

STEAM is a solid debut project for Mountain Fever Records that will leave no question in the minds of music lovers as to why Deeper Shade Of Blue has been added to a growing list of artistry excellence for the label. Steam is available to fans of great music through the most popular music outlets. Radio programmers can download the album via AirplayDirect or request a digital download by emailing radio@mountainfever.com. For more information on Deeper Shade of Blue