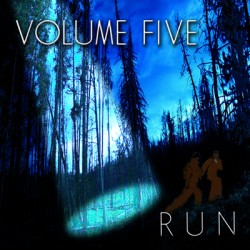 Mountain Fever Records is proud to announce the release of Run, the brand new album from Mississippi-based Volume Five. Today’s release marks the bands third with the label and follows the radio release of the album’s first single, “Rich Man’s Daughter” in October 2012. The single went to number one on the Bluegrass Today chart recently.

Volume Five, a group that started as a casual jam band in 2008, has grown into one of bluegrass music’s most exciting and unique acts. While each member comes to the table with a strong pedigree, having served tenure nationally with such well-known artists as Marty Raybon and Full Circle, Randy Kohrs and The Lites, and Tony Rice, these five musicians together truly blend into a band with staying power.

The group features the talents of ring-leader Glen Harrell on fiddle; Jesse Daniel on mandolin; Jeff Partin on guitar, Patton Wages on banjo, and Chris Williamson on bass; and while Volume Five is considered a traditional band, their earthy, soulful singing, bullseye harmonies, and precision picking set them apart from others.

On Run, the band focused on simply trying to find quality songs for the album. “I once heard Carl Jackson say when you are recording a new project, don’t worry about the song order, tempos, and things like that. Just cut all the good songs,” says leader Glen Harrell. “So that’s what we have tried to do. Just cut good songs and let our fans decide which they like the best.”

Songs like “Fox on the Run,” “Paradise,” and “Hickory Holler’s Tramp” were bluegrass festival favorites long ago. “Then it seems like no one would do them because they thought of it as being corny because everyone was singing them many years ago,” Harrell says. “Our opinion, and we hope the bluegrass folks agree, is if they are good songs they should be heard. We love to do songs that tell stories and that people can relate to. After all, that is what bluegrass music was founded on.” We just wanted to give them a fresh sound so that folks would say, ‘I forgot how great a song that is.’”

The title cut from Run was a song that was originally recorded for mandolin player Jesse Daniel’s solo CD. “He had it recorded but it had a much different tempo and feel to it. When we were in the studio tracking, I told Jesse I really liked that song but I was just hearing something different. So we started arranging the song to the way that I heard it. When we got it tracked, I remember Jesse saying I never even dreamed it would sound like this compared to the way it was cut on my CD. Jesse is a great songwriter and he really knows how to tell a story through a song. This is one of those songs that the crowd really gets into when we perform it live on stage.”

Other songs on the album include a new version of Charlie Louvin’s “See the Big Man Cry,” a song the band felt compelled to pay honor to by maintaining the original integrity of Louvin’s recording. “Rich Man’s Daughter,” written by former Volume Five band member Colby Laney, and the project’s first single, is a perfect example of what listeners have to look forward to. Glen Harrell’s voice soars perfectly with the minor-sounding melody in a way that just proves this band is a reckoning force.

The band received critical acclaim for their first two Mountain Fever projects, Down In A Cell and Children Of The Mountains. When talking about these two releases, J. Roths, Music Director with KEOS Radio in College Station, TX said, “From the very up-tempo traditional song “Long Journey Home,” to the newly written “Greenwood Mill,” and story songs like “The Rabbit Song” and “Coal Miner’s Curse,” this project will be much appreciated by the Bluegrass enthusiast. This is nice follow-up to the earlier album “Down in the Cell” that included “The Baptism of Jesse Taylor.” Don’t overlook that one! These guys have a good formula, pick good, sing good, harmonize good, so what more could you ask for. They’ve delivered!”

Run promises to be just as solid.

Volume Five already has what other bands search years for, a signature sound. “Just like the rest of the bluegrass world, I love these guys,” states Mark Hodges of Mountain Fever Records. “Their sound is recognizable after the first two or three notes and there are not many bands you can say that about. They play “quality bluegrass.”