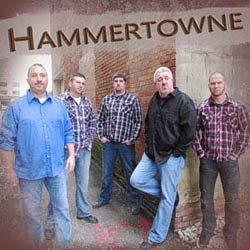 While relatively new as a unit, this is a well-seasoned and talented group of performers who can lay claim to performing with some of the finest talent in bluegrass music throughout their careers.  Band members include Scott Tackett on guitar/vocals, Brent Pack on banjo, Chaston Carroll on mandolin/vocals, Doug Burchett on bass/vocals and Dave Carroll on guitar/vocals. Carroll is widely admired for his songwriting prowess within the group and with others.  He has new cuts on albums by Grasstowne (Featuring Ronnie Bowman), Junior Sisk and the Ramblers, Russell Moore& IIIrd Tyme Out and more.

From its inception, the group’s identity has been defined by a hard-driving style of bluegrass that combines unique instrumentation with a distinctive knack for weaving vocal harmonies.  Hammertowne creates their hard driving sound with one foot in the traditional arena to honor those who paved the way before them, and the other in the progressive arena as reflected in their many original songs they write and perform.

One of bluegrass music’s most prolific songwriters, Larry Cordle says, “Upon hearing Hammertowne for the first time I thought holy cow! These guys ain’t kiddin’ around….Sometimes a combination comes together and something magical happens when they render together…that is what is happening here. The sky’s the limit for these boys…It’s fresh and new… but fits like your favorite old shoes. These boys can hammer down.”

In most cases, much forethought, planning, and sometimes recruiting, goes into forming a musical unit, but not in the case of Hammertowne.  This group of musicians gathered in a studio as session players on a solo effort, and something special transpired.  After the stop button had been hit on the first take of the first song, several seconds of complete silence filled the room, until finally from the control room came…”WOW!”  The energy and musical compatibility was so strong, that the musicians decided they wanted to continue. Thus, Hammertowne was born.  With this group of musicians, it is simply about the music, and having more fun on stage than should be legal.  Their love of playing and entertaining emanates from the stage as well as studio.