Mountain Fever Records announces the release of new music from Nothin’ Fancy. “Papa Wants To go Back” is available today and is the first single from the band’s upcoming album, Time Changes Everything (10/12/18). 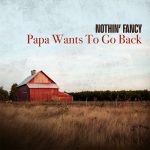 For the past 24 years, Nothin’ Fancy has been a steady staple for bluegrass fans and festivals. And although they’ve gone through a handful of personnel changes in the last two decades, the band has embraced each change and forged ahead without abandon. Their latest release, Time Changes Everything

(10/12/18) is a perfect example of embracing that change, drawing from the strength of it, creating a new fresh sound, and remaining true to their goal of being themselves. Founding members Mike Andes (mandolin/vocals), Mitchell Davis (banjo), and Chris Sexton (fiddle/vocals) added brothers, Caleb (guitar/vocals) and James (bass) to the ensemble over the course of the last three years adding just the right mix of youthful energy to an already engaging and lively sound.

Written by Allen Mills, “Papa Wants To Go Back” was originally released in 1991 on Bluegrass Classics by The Lost & Found. Here, Nothin’ Fancy features Caleb on lead vocals and although the tune is happy in nature, the lyrics are quite the opposite: lamenting of an old man who begs his family to go home but no one has the nerve to tell him the real reasons he can’t.

Papa wants to go back in the morning

But how can we tell him it’s not there

The place that holds a lifetime full of memories

Is gone now because we didn’t care

“Papa Wants To Go Back” is available as a digital download through the most popular music outlets. Radio programmers can download the single via AirplayDirect or request a digital download by emailing radio@mountainfever.com. Time Changes Everything will officially release on October 12th, but Nothin’ Fancy will be offering advance copies at their annual Nothin’ Fancy Bluegrass Festival in Buena Vista, VA September 20-22. For more information on Nothin’ Fancy, visit www.NothinFancyBluegrass.com