WILLIS, VA – There’s no doubt bluegrass fans love Dave Adkins’ music, and Mountain Fever Records is pleased to deliver his next hit, “Better Days A Coming.” This song is the first single from Dave’s upcoming album due in early fall. “Better Days A Coming” is now available to consumers and radio.

Dave co-wrote “Better Days A Coming” with his wife Katrina and they are delighted to share it with the world. About it he says:

“I love this song and the fact that my sweetie, Katrina wrote it with me. Sometimes I write as I drive and whoever is with me will take notes for me. When we travel and Katrina’s with me, we work on a lot of music. One day I was telling her my ideas, and she started adding stuff, and before you know it we had a song done. I’m tickled Mountain Fever Records picked our song for the first single from my new album.”

“Better Days A Coming” is an upbeat and grassy tune. As the title indicates, it leaves one feeling optimistic and happy. We hope you enjoy it! 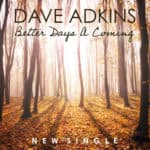