Mountain Fever Records is excited to announce a new song from Summer Brooke and The Mountain Faith Band is available to radio today. 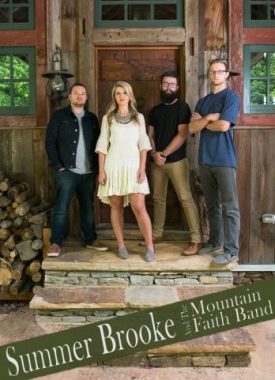 “Umbrella” is the first single from the upcoming album, Small Town Life, due for release this summer. Consumers may purchase “Umbrella” and pre-order the album next week.

North Carolina’s pride and joy is made up of the sweet, soulful vocals of Summer McMahan on fiddle, her brother Brayden on banjo, their dad Sam on bass, with Nick Dauphinais on guitar, and Cory Piatt on mandolin. Although the band has been performing together since 2000, they really gained momentum through their appearances on America’s Got Talent where they advanced to the semi-finals. Since then, they have made their Grand Ole Opry debut, won the International Bluegrass Music Association’s 2016 Emerging Artist of the Year, have been appearing regularly at professional sports stadiums across the country performing the National Anthem, and were named the Atlanta Braves 2016 Band of the Year. Since their touring schedule has kept them on the road full-time over the last couple of years, the group has been working on growing their brand with a new name, Summer Brooke and The Mountain Faith Band, and new material for their third album on Mountain Fever Records. “The band name changed a little bit because Summer has not only been the focus of our sound with her lead vocals for years, but she’s also been doing more of the emcee work lately,” explains Sam. “The whole band decided a name change would be the best thing for the future as we grow and progress.”

“Umbrella” is the first single from the band’s upcoming album due for release this summer, and was by the band’s good friend, Dean Berner along with Laura Veltz and Ben Cooper. Speaking of sheltering a loved one from all of the world’s outside problems, “Umbrella” is a happy little number that is delivered with poignant perfection by Summer Brooke. “When we heard the demo, we all had the same wide-eyed look,” explains Summer. “It’s one of the most well-written songs we have ever heard! We knew we HAD to record it and we hope everyone loves it!” Fans of Summer Brooke and The Mountain Faith Band will get a special preview of the new music when the band makes a return guest apperance this Friday, June 16th, on the Grand Ole Opry.