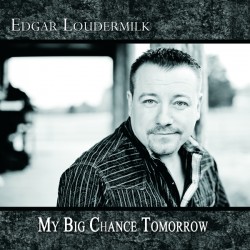 Mountain Fever Records founder, Mark Hodges says, “This release showcases Edgars great writing as he penned all 15 tracks and in it the variety of what he is capable of is evident. Edgar is a master songwriter as well as a great singer and we won’t even talk about what nice guy he is!
Loudermilk is considered one of the finest young players and voices in bluegerass today.  Influenced greatly by his father and grandfather, Edgar cut his teeth on bluegrass by learning to play bass to the legendary record, “Bluegrass Album Band Volume 1” record.
With music and playing in his veins, it comes to reason that Loudermilk would also be an impressive songwriter having written all twelve songs on his first album titled Roads Travelled and all 15 songs on the upcoming July release.
He first had the idea for this tune while coming back from Canada while traveling with the band Russell Moore and IIIrd Tyme Out.   “We were in some really big mountains and I thought that the pioneers and early settlers had a chore just to make it through those mountains with mules, wagons, and their families. That thought led me to writing the song “Shady Green.”  We are excited with the release of this new album in which we wrote all 15 tracks with only one co-write. I’m excited to bring out more of my music in hopes of it being received well. We have many featured guests on the album such as; Wayne Benson, Jeff Autry, John Cowan, Junior Sisk, Shawn Lane, Buddy Melton, Scott Vestal, and many more.”
Surrounded by music at an early age, he was only nine when he began playing bass in his family’s band, Loudermilk was also exposed to the great music of some of his famous relatives, The Louvin Brothers.  He continued to play in his family’s band until joining Carolina Crossfire.  The band had quite a following and it wasn’t long before he decided to try his hand at on a larger professional scale, a decision that has made him a staple for elite artists in bluegrass music.
Loudermilk previously toured with award winning bluegrass queen Rhonda Vincent, followed by a gig as bass player and tenor singer in Marty Raybon’s (then newly formed group) Full Circle.  He would back up Marty Raybon for almost five years.
In 2006, Loudermilk took over the bass playing and singing duties and became the newest member of IIIrd Tyme Out, replacing longtime bass player Ray Deaton in July, 2007.
Darrell Webb Band to Mountain Fever Syntax and Mountain Fever Records Partner Distribution