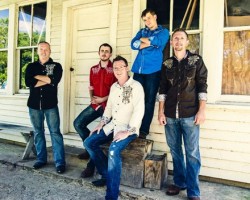 The energetic and electric Darrell Webb Band, nominees for the 2013 Emerging Artist of the Year award, have signed with Mountain Fever Records and will release their 20th Anniversary celebration album in early 2014. A single from the album is set to go to radio in October. “I am thrilled to add another musician of Darrell’s caliber to the label. This should be exciting!” says label owner Mark Hodges.

Known for bringing a healthy dose of zeal and drive to their stage performances, the band reaches beyond traditional boundaries, fully embracing all aspects of the bluegrass genre. A Grammy-award nominated session player for his work with Dolly Parton, and a decorated IBMA and SPBGMA award winner, Webb has played with some of the bluegrass industry’s biggest names, many of whom join them on the album to celebrate this 20 year milestone. Guests include Rhonda Vincent, Blue Highway, Daily & Vincent, The Grascals, J.D. Crowe, Doyle Lawson, John Cowan, Lonesome River Band and Wild Fire.

Also joining the lineup is ground-breaking musician and bluegrass producer Jim VanCleve, from Mountain Heart fame. “This is my second record working with Jimmy and he just brings a whole lot to the process. He thinks outside of the box more than I do, performance wise, musically, vocally…he brings different material to the table. “The Pistol and the Pen” from Breaking Down Barriers, my first record with Jimmy, is my favorite vocal thing I’ve ever done. He made a believer out of me. I’ve always just been a bluegrass singer and by him picking out different material, it makes it more exciting for me,” Webb says.
He’s excited about VanCleve’s contribution to this next album. “All of the special guests on the record makes it so special. There will be a different artist for every song and I played with all of those artists,” he says. “This record has probably the strongest material from any I’ve done. There are ballads to rock and roll to bluegrass to country,” he adds.
Webb’s especially excited about the song “More Life,” the song he does with Rhonda Vincent that was written by songwriting titan Mike Reid (known for Bonnie Raitt’s “I Can’t Make You Love Me” among other huge hits). “It’s a great, great song. For the most part, it’s me and Jim picking out material. We decided what we liked and what we didn’t. It was always my first call. Probably a 50/50 agreement on everything. We’ve been friends for over 20 years so it just took awhile to work together but this is my favorite project ever.”
The album was recorded at Omni Artist Studio in Weaverville, North Carolina
Formed in 2009 by lead tenor singer and frontman Darrell Webb, the band is comprised of Jeremy Arrowood (co-founding member, vocals, bass), Jarod Hensely (vocals, guitar), Jake Joines (vocal, resophonic guitar) and David Carroll (banjo). Together they have been nominated in two 2013 IBMA awards (International Bluegrass Music Association) categories for Emerging Artist of the Year and Instrumental Recording of the Year for “NoraBelle,” which was penned by Webb.
Ash Breeze My Big Chance Tomorrow