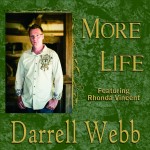 We are proud to release the first single from Darrell Webb’s upcoming 20th Anniversary Album which will be released early next year.

“It’s a great, great song,” Webb says of “More Life.”  He also adds that, “This is my favorite project ever.”   The album was recorded at Omni Artist Studio in Weaverville, North Carolina
THE WAIT IS OVER … From Jett’s Creek Ash Breeze Releases First Single