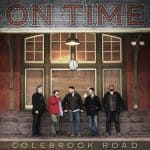 band has already seen great success with this most recent album and keep a busy touring schedule. That’s not too shabby considering these boys hail from north of the Mason-Dixon line. Read below to learn more.

On Time features the talents of:

Wade Yankey – Mandolin
Joe McAnulty – Fiddle & Baritone Vocals
Mark Rast – Banjo, Dobro, & Bass Vocals
Jeff Campbell – Upright Bass & Tenor Vocals
•Recorded, Mixed & Mastered at Mountain Fever Studios – Willis, VA
•Colebrook Road is based out of central Pennsylvania.
•The band was formed in 2009 and celebrating their 10th anniversary.
•This is the band’s third album.
•”On Time,” the album’s title cut has received incredible airplay.
•The band currently has three songs from On Time in the Top 20 of the Roots Music Report Contemporary Bluegrass Chart.
•Colebrook Road plays mostly original music created by the band members.
•Their sound is unique, modern, and complex all while staying true to the bluegrass genre.
•On Time is available on vinyl, CD, by digital download, and by streaming.