Welcome To The Stevens Family 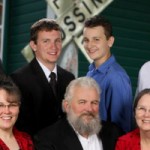 Mountain Fever Records is proud to announce today’s release of the first single by West Virginia bluegrass group, The Steven’s Family, titled “Down on the Farm,” from their upcoming debut album of the same name.
“Down on the Farm” was written and arranged by band member Sissy Stevens.  The song is a true portrayal of actual events in Stevens life and expresses her love for her Grandfather ‘Kentucky Ken,” and other family members.
The remarkable Stevens Clan, with ten children, has been making music together at home and in church for decades.  Since their debut as full-time professional performers in 2007, they’ve been impressing and captivating audiences from the Mid-Atlantic seaboard to Florida, from the Midwest to the Missouri Ozarks, up into Canada and back again.  Their Appalachian roots lend a unique authenticity to their bluegrass-style sound and performances.Down on the Farm continues to convey the Steven’s Family’s easy going country mountaineer humor, stunning instrumental wizardry and a unique blend of vocal harmonies.
Through an impressive catalog of original songs, their performances capture not only the high lonesome sound of American bluegrass at its strongest, but also reveal the love, joy, passion and strong faith of this proud mountain family.
Very few bluegrass artists today can lay claim to such an authentic musical heritage, and every member of the band nurtures this heritage to bring audiences very real American roots music as it has been performed throughout the Appalachian Mountains for more than two hundred years.
More Good News From The Spinneys DETOUR AHEAD