Volume Five Releases: The Day We Learn To Fly 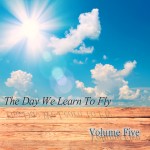 Volume Five, the Mississippi group that started as a casual jam band in 2008, has grown into one of bluegrass music’s most unique new acts.  Today marks their first gospel and 4th overall release on Mountain Fever Records with the well crafted Southern gospel tinged bluegrass album, The Day We Learn To Fly.
While each member comes to the table with a strong pedigree, having served tenure nationally with such well-known artists as Marty Raybon and Full Circle, Randy Kohrs and The Lites, The Roys and Tony Rice, these five musicians together truly blend into a band with staying power.
The release of The Day We Learn To Fly takes the band to a new level.   It is the band’s 4th release on Mountain Fever and lives up to the quality that the band releases time and time again.  The album however is full-tilt gospel, a true love for each band member.  The title cut “The Day We Learn To Fly” was written by long time friend and fellow musician Stacy Richardson.
Volume Five features the talents of ring-leader Glen Harrell on fiddle; Harry Formby Clark on mandolin; Jeff Partin on guitar, Patton Wages on banjo, and Chris Williamson on bass; and whileVolume Five is considered a traditional band, their earthy, soulful singing, spot on harmonies, and precision picking set them apart from others.

Fans are already familiar with the band from their heavy festival touring schedule.  The constant performing has provided the band with the time and experience to hone their craft to perfection and has given this unit the time and stage experience to entertain just about any crowd.
One thing fans can count on with Volume Five is that they will never be let down with their live performances and that those live performances will transcend the live show and be just as impactful on their recorded music.  The Day We Learn To Fly maintains that same level of quality musicianship and has been making an impact at radio.
“I love these guys,” says Mark Hodges of Mountain Fever. “They have a signature sound and their music says something.  You  know who they are in the first two or three notes and that’s a rarity with bands today.  They play quality bluegrass.”
Volume Five’s souful singing and tight harmonic structures are worth seeking out.  After critical acclaim and top charting positions on their last several records, the band is ready to keep climbing up.
Dave Adkins Lands #1 Going Nowhere Fast – Digital Release from DETOUR