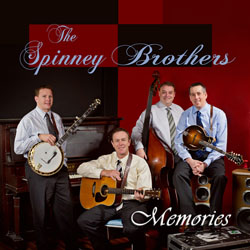 The Spinney Brothers are proud to present, Memories, their debut CD for Mountain Fever Records. The project, produced by Ron Stewart, includes music from notable songwriters such as Marshall Warwick, Carl Jackson, David Cooper, and Dave Lindsey as well as original music from Rick Spinney. For more information on The Spinney Brothers, visit their website.

From the Annapolis Valley of Nova Scotia, Canada, brothers Allan Spinney on guitar and vocals and Rick Spinney on banjo and vocals debuted their band in 1992, showcasing a tight brother duet vocal style that was immediately recognized for its energetic and distinctive sound. Since that time, the band has released 8 CDs independantly and are recipients of many Eastern Canadian Bluegrass Awards including 3-time Vocal Group of the Year. In 2010, The Spinney Brothers were inducted into the Nova Scotia Country Music Hall of Fame. Joined by Gary Dalrymple on mandolin and Darryl Hebb on bass, The Spinney Brothers have performed professionally all over Canada and in the United States from California to Maine making them Canada’s International Bluegrass Band.