Fresh from the Keystone State, Mountain Fever Records is pleased to release new music from Colebrook Road. “On Time” is the band’s first single from their upcoming album due out this spring.

“On Time” is written by band member Jesse Eisenbise and focuses on the struggles of day to day life. Listeners will love the song’s upbeat and progressive sound, but will also appreciate its traditional bluegrass foundation. 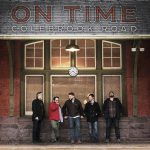 It’s no wonder why they caught Mountain Fever Records President Mark Hodges’ attention. He says, “We welcomed Colebrook Road to our fold last year and look forward to a bright future with this talented and promising band.”

For more about Colebrook Road visit their website and visit here for tour information.

Look At That Moon! Blue Moon Rising That Is NEW SINGLE FROM ALAN BIBEY