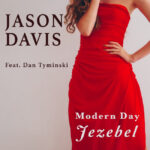 Mountain Fever Records is thrilled to announce the new single from Jason Davis and a powerhouse of musicians, titled “Modern Day Jezebel,” featuring Dan Tyminski is out today! Jason received the song from writers Daniel Salyer and Jeff McClellan several years ago, wishing to record it at some point and its time has come. Jason Davis is on banjo, his wife Grace Davis on bass, the one and only Adam Steffey on mandolin, Jeff Partin on dobro, and Dan Tyminski on guitar and lead vocals.

Jason Davis’ playing truly shines on this tune with his tight yet fluid signature banjo playing. You’re in for a great toe tapping experience with this one. “We’ve long stood behind Jason Davis’ solid style on the banjo and his clear choices around bluegrass music and the players he surrounds himself with. He’s on a good road with the music he loves and is always a pleasure to work with.” – Mark Hodges President Mountain Fever Records