Kristy Cox Makes It 4 In A Row! 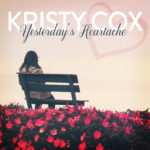 BACKLINE Is Out With “THE FARM”