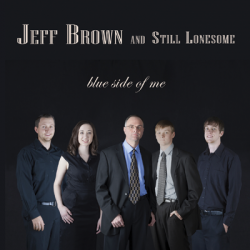 Jeff Brown, talented former sideman for bluegrass legend Larry Sparks, along with his band, Still Lonesome, release their new album Blue Side of Me today on Mountain Fever Records.  The single “These Old Blues” was released in April to an enthusiastic reception from radio DJs and fans.Members of Still Lonesome, Jeff Brown, Austin Brown, Meredith Goins, Josh Blankenship and Josh Underwood, all add their own unique flair to the groups music.

Guests on the album include Tina Steffey along with Wyatt Rice who says, “Jeff Brown & Still Lonesome are amazing! I had the chance to play on three cuts of this new CD, and it was a real pleasure to do so. Their song selection and arrangements bring them into a sound of their own.  Anyone who is into bluegrass should have this one in their collection.  Superbly done!”

In addition to the single “These Old Blues,” released in April and co-written by Brown’s former boss, Larry Sparks and his sister Bernice (Jaymore Music ©BMI), the album also includes tracks “Little Country Town,” “Hickory Switch,” “These Old Blues,” “The Water and the Mud,” “Virginia I Hear You Calling Me,” “Last Day At Gettysburg,” “These Ole Mountain Ways,” “Come to Me,” “Coal Mining Town,” “Weary Pilgrim Welcome Home,” and “Lonesome Fugitive.”

After years with other bands, Brown is enthusiastic of this new release.  “I’m excited about how the project turned out. I wanted to release songs that are about life; songs with feeling and a story.  I believe we were able to capture the emotion of that on this project.  I hope folks can be brought back to the simpler things and the way it used to be.”

While fairly new as a music unit, Still Lonesome plays bluegrass music that showcases the years of musical experience spearheaded by Brown, who started playing with Sparks as bass player and tenor singer in 1993.  Brown worked as a Lonesome Rambler from 1993-1996 and continued to play various dates and recording projects until forming Still Lonesome.  He has also toured with The Charlie Sizemore Band as well as pulling fill-in duties with Blue Highway and Dr. Ralph Stanley and the Clinch Mountain Boys.

With performances on some of country music’s greatest stages, including the Grand Ole Opry, the Ryman Auditorium as well as television shows like Austin City Limits and PBS’s Song of the Mountains, Brown is a seasoned performer with a long history.

Sparks himself said, Jeff Brown understands the music from the Stanley Brothers to Larry Sparks.  Jeff did the tenor singing and played bass in my band for some time and continues to record some with me to this day.  Our music needs someone to help keep it alive and I believe Jeff is one of those who can do just that.  I hope to hear more from Jeff and his band in the future.

The youth of the group positions them to be a future favorite in the genre.  Meredith Goins handles fiddle duties and has studied violin at UTCs Cadek Conservatory, Vanderbilts Blair School of Music and East Tennessee State University.  She is a two time National Champion of Country Music Beginners at the Smithville Fiddlers Jamboree and first place winner of the 2011 Galax Fiddlers Convention. In 2003, she performed on the Grand Ole Opry with fiddle extraordinaire Aubrey Haynie, Vassar Clements, and Daniel Carwile at only the age of 14, and has since performed as a guest with The Boxcars, Roland White, Vassar Clements, Buddy Spicher, Wayne Henderson, and Melvin Goins to name a few.