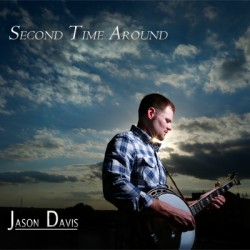 Songs on Second Time Around showcase Davis’ expert ability on the banjo.  The first single
from the album, “Bootleg John,” featuring Shawn Lane and Steve Gulley, is currently at #16 on the Bluegrass Today chart and continues to get heavy airplay.  Other songs on the album include “Where The Wild River Rolls,” “One More Rocky Road,” “Bully of the Town,” “I’ll Be Waiting For You,” “Darby’s Castle,” “Oh Death,” “Hard Rock Bottom of Your Heart,” “JustAnother Broken Heart,” “Liberty,” “Ted’s Tune,” “Gold In Carolina,” and “Shamrock.”
Davis is a well-known player and widely accepted as an important cultivator of the banjo. His history with such bands as Michelle Nixon and Drive, Kenny and Amanda Smith Band, BlueRidge and GrassTowne, provided a solid proving ground for Jason to not only hone his playing, but to become a valuable contributor to the unique sound of each group.  His 2008 solo album, Steppin’ Out garnered him a nomination for IBMA Instrumental Album of the Year and lifted his profile as an strong solo artist.  He currently tours with Junior Sisk and Ramblers Choice.

It’s been six years since Davis cut his last record and he felt the time was right for him to release new work.  Solid songs from strong writers such as Daniel Salyer and Kyle Burnette give the album a modern appreciation of bluegrass music
while “obscure stuff that people probably haven’t heard in a long time,” as Davis says, give it an air of tradition.  “I basically went in with the idea of cutting the kind of bluegrass album and feel that I enjoy playing,” Davis adds.

Former IBMA Dobro Player of the year, Phil Leadbetter, says “I’ve had the opportunity to play with many great banjo players in my career, but Jason Davis takes a backseat to no-one. His timing, tone, taste and drive is what all banjo players hope to achieve, but not many ever do.”

The Expedition Show The Churchmen