Mountain Fever Records is pleased to announce the release of “I Still Pray” from Kristy Cox. “I Still Pray” is a track from Kristy’s upcoming album due for release in 2018 and is the perfect sentiment for this special time of year. 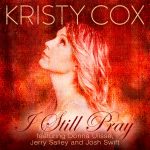 Written by Australian born songwriter, Kasey Chambers, “I Still Pray” is right at home in the very capable vocal arms of fellow Australian, Kristy Cox. Here, listeners will enjoy Kristy’s powerful, yet tender treatment of what will likely be one of bluegrass music’s new favorite a cappella gospel songs. Joined by Donna Ulisse, Jerry Salley, and Josh Swift, this quartet melds perfectly, sweetly reflecting the subject of which they sing.

“I Still Pray” is available to radio programmers just in time for the Christmas season and may be downloaded via Airplay Direct or by emailing a digital download request to radio@mountainfever.com. Consumers may purchase “I Still Pray” through various digital outlets. Kristy’s debut album for Mountain Fever Records will be available in 2018. For more information on Kristy Cox, visit www.kristycox.com or www.mountainfever.com.

About Kristy Cox
From a young age, Kristy Cox captured plenty of attention with her distinct singing style and positive nature, resulting in opportunities to open shows for major acts and making regular festival and television appearances across Australia, Europe, and the US. In 2015 she was selected as an official showcase artist for the International Bluegrass Music Association (IBMA) where she began drawing the attention of music industry professionals. With a string of #1 hits on radio and country music television in Australia, Kristy has also made headway on the US bluegrass charts in recent years. Her last two projects, produced by Grammy® winner Jerry Salley, were very well received, with the latest making strong appearances throughout 2016 on multiple album and songs charts. 2017 kicked into high gear when she won “Bluegrass Recording of the Year” from the Country Music Association of Australia, and she also made the IBMA Awards second ballot in several categories.