Mountain Fever Records is pleased to release the newest project from Hammertowne. Pictures is available today! 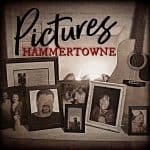 Formed in 2012, Hammertowne is based out of the fertile bluegrass state of Kentucky. They are an incredibly popular group, and fans have been eagerly awaiting new music from them since 2017 when their very successful album “Hillbilly Heroes” which was released. The title track from that album reached the #1 spot at both the Bluegrass Unlimited and Bluegrass Today weekly charts. Listeners will definitely be pleased with the band’s newest offering featuring traditional, undiluted, great grass and will again be begging for more.