Amanda Cook Is “Narrowing The Gap” 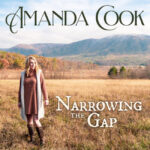 and her band, today! The album title points to Amanda Cook’s keen ability to keep her eye on track with the goals of her music career. Two years ago she made a foundational move with her family to the Blue Ridge Mountains of Virginia from Jay, Florida. Not only a brave new step but also a strategic one in light of the needs of being a touring musician. Full of courage, dedication, and love for bluegrass music she has proven herself as an outstanding bandleader and powerful presence in the genre. Of her last album Bluegrass Today’s John Goad wrote “One of the hottest voices on bluegrass radio over the past few years has been that of Florida native Amanda Cook.”

Amanda and her band have pushed themselves to bring us their “grassiest album to date,” Narrowing The Gap. Three strong singles having already released off this new record “Get On Board,” West Virginia Coal,” and most recently “Lonesome Leaving Train” which Amanda co-penned with admired song-writer Thomm Jutz. The latter is a highly melodic driver that tells a tragic story and is a powerful bluegrass piece about a ghostly love. Get yourself the full album, you won’t regret it.