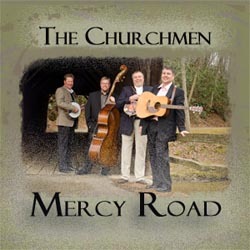 Dove nominated bluegrass gospel favorites, The Churchmen, release their brand new project, Mercy Road on Mountain Fever Records today. This is the inaugural venture for the band on the label and their first release in over 5 years. The first single from the album, “Bread and Water,” was released to radio on March 5th to a stellar reception.

The well known bluegrass gospel group, based in Collinsville, VA, was formed in 1989 when they started singing in local churches to a great reception. They were suited perfectly from the beginning for national and international notoriety as their Southern Gospel style, four part harmony, and bluegrass instrumentation gives them a unique and welcome sound.

The new album, Mercy Road, features the title track penned by respected bluegrass fiddler and songwriter, Becky Buller along with songwriting master Jerry Salley. Buller has become a designated muse of sorts in the contemporary bluegrass world. Bluegrass Unlimited agreed that she is "carving out a niche for herself...." Salley has long been a respected go-to for his mastery of putting feelings into words.

The first radio single from the new album was the song “Bread and Water,” and was written by the newest member of the band, Carroll Arnn. Arnn wrote the song and presented it to the group as soon as he started in the fall of 2012.

Gospel Grammy winners Jeff and Sheri Easter are fans of the group and said, "The Churchmen are one of the fastest growing, hottest sounds in Bluegrass Gospel Music today. We have worked with these guys a lot, and they really live what they sing.”

The Churchmen were previously nominated for a Dove Award for Bluegrass Album of the Year for their album Journey Home and Traveling Through including attention for the Dove nominated song “Bedside Prayer,” previously up for Bluegrass Song of the Year. Their most recent CD, I’ll Be Long Gone garnered strong reviews and continues to get substantial radio airplay.