Nashville, Tenn. – Tammy Rogers and Thomm Jutz are pleased to release two holiday singles ahead of their forthcoming full album, Surely Will Be Singing, which releases Jan. 21 via Mountain Fever Records. Available everywhere today for streaming and airplay, “Lonesome Christmas” and “Dancing In The Snow” are an early Christmas gift to music fans suitable for a variety of moods. “Dancing In The Snow” captures the joy of winter, harkening back to memories of childhood and the season’s first snow. “Being able to get excited about these seemingly little things is what keeps us humble and happy. That’s what Tammy and I wanted to convey in this song,” says Jutz. Watch the video for “Dancing In The Snow” right here.

Recognizing that not every holiday is bliss and bows, the duo sought to also record a song for the somber moments of the season. “Lonesome Christmas” is a song for the flip side feeling. Jutz sees the holidays as an opportunity to either “turn away and count ourselves lucky or allow ourselves to get cracked open to our shared humanity.” Pointing towards lonely folks in the grocery store and an elderly couple alone for the holidays again this year due to the pandemic, the song matches the lonesomeness of some holiday experiences, acting as both a salve and an all call for kindness towards those in need.

About Surely Will Be Singing: The album is a twelve-song collection of Tammy and Thomm’s favorite co-writes thus far. “We’d always talked about making a duo record,” Jutz says. “We started on some demos and when the pandemic hit, we were writing on Zoom. We both said the last 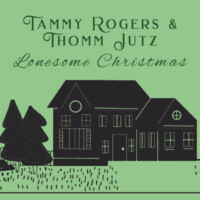 thing we wanted was to say when this thing is over that we wasted a year sitting on the couch and watching TV, so let’s stay with it. And that’s what we did.” Rogers adds, “We’re both very serious about what we do but we’re also very easygoing in the way we approach things. That’s at the heart of how we write. We’re both willing to see where things naturally go. I love that because at the end of the day, we usually wind up with something I wouldn’t have come up with on my own.” Releasing Jan. 21 via Mountain Fever Records, the album is currently available for pre-order. The album’s single “Tree of Life” can be heard now.

About Tammy Rogers and Thomm Jutz: Though their creative paths long ran parallel in Nashville’s world-class bluegrass scene, a chance meeting between SteelDriver fiddling phenom Tammy Rogers and prolific songwriter and in-demand guitarist Thomm Jutz led to a fruitful songwriting relationship. Over the last five years, the pair has written nearly one song per week together—amassing a catalog of over 140 songs—twelve of which can be heard on Surely Will Be Singing.